Dear parents and students,We sincerely thank you for your enthusiastic support for the photo collection event of the World Voice Day 2021.During the event, our school collected a large number of nice photos. However, due to plenty of excellent works, we are sorry that we cannot include all of them in our promotional video. The submitted photos have already been uploaded on the school website for everyone’s appreciation.Last but not least, on behalf of the organizer, we would like to thank you again and sincerely ask for your continuous support and participation in our future activities. We wish you all the very best.Yours faithfully,Ho Yu College and Primary School (Sponsored by Sik Sik Yuen)

Aiming to exercise the flexibility of learning modes and strengthen students’ speaking ability, ‘I’m a KOL’ competition provides a platform for primary school students in Hong Kong to produce educational videos in which students are permitted to select and use their own choice of materials and adopt their preferred ways of presentation. We are delighted to announce the achievements of our student, Zhou Chin Yu of P.6B, who performed outstandingly and showcased her talent in the competition. Being able to impress the judges, she has earned ‘the Best Potential Award’ and ‘the Most Favorite Award Online’. Congratulations to Chin Yu and we hope she can keep up her good work!

We have been devotedly making efforts in implementing measures aiming to build a greener campus, raise students’ awareness of environmental protection, and encourage them to think and act green in their daily living. Our students have started learning about nature, conservation and waste reduction since primary levels. We believe the emphasis on Information Technology in education can stimulate students’ research and study, enrich their knowledge in an eco-friendly energy generation and enhance their desire to seek for other effective ways of conserving the earth.  Having successfully put into practice our aims and beliefs, we are indeed overjoyed to receive recognition from the Environmental Campaign Committee, Environmental Protection Department and the Education Bureau and have been granted the Hong Kong Green School Award in both Secondary and Primary School Categories.

With collective efforts of everyone at Ho Yu, we help make changes in various aspects of our daily lives by nurturing a cleaner, greener and better lifestyle.

In order to cultivate students’ environmental awareness and encourage them to lead a green life, our school has participated in “Islands Community Green Station” project organized by the Environmental Protection Department. Collection points are set up in school for everyone to separate their washed waste for recycling and thereby building a green community. After the Mid-Autumn Festival, we took the initiative to launch a “Mooncake Boxes Recycling Campaign” to collect clean mooncake boxes that are made of metal or paper for four consecutive days.

Our two principals, teachers, staff members of the general office and students from both college and primary school have actively participated in the whole-school campaign. In just two days, we collected nearly fifty mooncake boxes, which are to be sent to the recycling centre of “Islands Community Green Station”. The Mooncake Boxes Recycling Campaign allows students to contribute to the community by supporting regional waste reduction and recycling. Being responsible to our environment, Ho Yu students have spent a meaningful “Green Mid-Autumn Festival” through taking actions to build a green community.

We believe that character education can be achieved through experience. As teachers, we are continuously trying our best to create experiences for our students. Therefore, our school participated in the ‘Sing Out’ character education musical project sponsored by the Hong Kong Jockey Club Charities Trust.

Despite the fact that the original plan of physical training was disrupted by the pandemic, thirteen S4 and S5 students from our school were selected to take part in online courses and short film performances. The learning outcomes are presented in the form of a short musical film.

The project aims to develop our students’ ‘four Ds’, namely ‘Dedication’, ‘Discipline’, Self-Discovery’ and ‘Delight’. Participating students have been fully involved in the musical theatre training and have been meticulous in their practice and performance. Besides, students’ discipline has been cultivated through team activities. While experiencing failures and frustrations during the training, students are able to discover and understand themselves more. Without any doubt, having a chance to meet like-minded friends and accomplish the tasks together successfully brings them a lot of joy. Upon completion of the project, all students agreed that the musical theatre training was definitely an unforgettable experience.

In the wish to lay a more solid foundation for the junior primary students and for them to have a smoother and orderly transition to the “self-regulated learning” mode operated in the senior primary and junior secondary levels, our teachers have tailor-made a programme called “DEAR” for our primary one students. We believe that if we can establish a DAILY reading habit for our children at the beginning stage of learning, it will help them develop the spirit of EXPLORATION. Meanwhile, we value children’s learning experiences, hoping that ACHIEVEMENT will come along step by step as they make REFLECTION on their experiences.

This is how we came to name our programme "DEAR", which means becoming "what we cherish". We hope that our children, just as seedlings, will grow up and develop their full potential under the advantages of "through-train" education.

Every part of the two solar-powered vehicles was assembled by the students with their own hands. It has taken the “Mobius” team around four months to produce the solar-powered vehicle. They are very proud of their achievements that stemmed from their excellent division of work according to individual talents of the team members.

The “Sun Idea” team decided to take part in the competition for the second time because the team hoped to develop a more efficient and advanced solar-powered vehicle. After many trials and failures, the team has finally succeeded in the competition by improving on the shortcomings of their previous design.

Striving for the same goal and the time spent together in the physics room to prepare for the competition has created unforgettable memories and enriching experiences for all the team members. The hard work of our students has finally been rewarded. 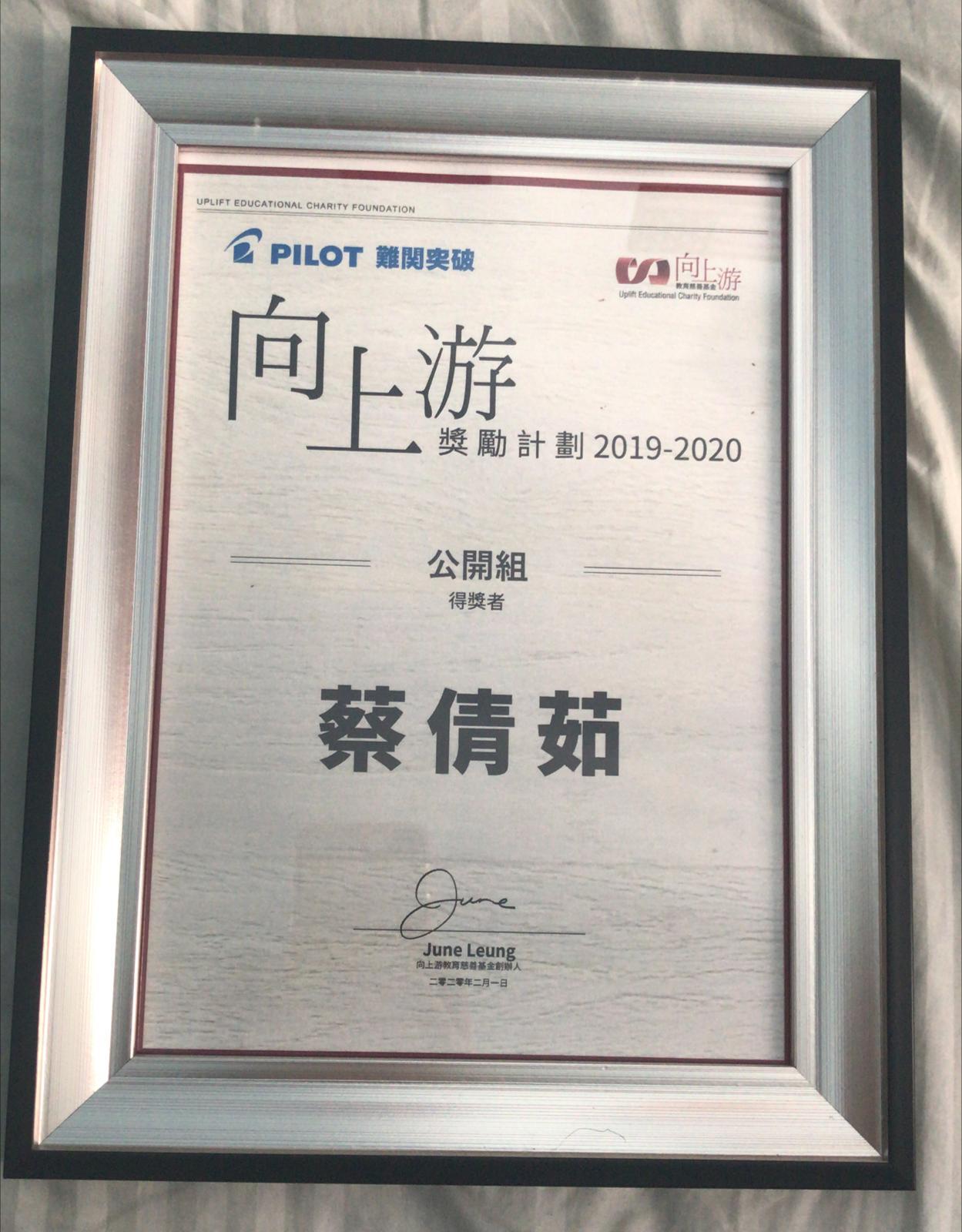 The scholarship encourages adolescents from diverse backgrounds to overcome their own difficulties and work diligently to pursue their dreams and equip themselves with knowledge. With the spirit of exerting oneself when facing difficulties, Choi Sin Yu from S5B won the scholarship under the open category for secondary school students.

Growing up with a complex family background, Sin Yu has experienced many adversities in her life. Sin Yu in her young age chooses to confront misfortunes with her positive attitude and breaking through the predicaments to pursue the life she wants. Sin Yu believes that, “we can’t choose where we come from, but we can learn to accept it and find our happiness within.”

Many people eventually remain stagnant as they hesitate when encountering difficulties. However, Sin Yu’s experience has shown us how setbacks can also hone our will and help us scale new heights. Sin Yu is very grateful for having a different experience as compared to others which in turn motivates her to face challenges. The experiences have enriched her life and allowed her to grow and develop. In the future, Sin Yu wishes to become a teacher to nurture the new generation of our society. We believe her optimistic attitude can make her a good and dedicated teacher for sure!

The 2nd Hi-Five Engagement Award Scheme organized by Baptist Oi Kwan Social Service jointly with the Education Bureau and the Education University of Hong Kong has been successfully concluded. The scheme aims at encouraging schools to cultivate a positive school culture that cherishes connection, thereby allowing students to build a sense of commitment and responsibility in the campus with sufficient care from the school.

We feel honoured to have won the Innovation Award in 2019-2020, in addition to the Action Award won in the previous year in recognition of our creative and effective plan of building connections. We will keep working hard to design a variety of programmes for Ho Yu students to provide them with diverse learning opportunities. We will also actively build an inclusive culture that strengthens students’ mentality.

The National Essay Writing Competition has been very popular with more than 10 million secondary school participants nationwide every year. In the year before last, among nearly 60,000 student participants in Hong Kong, only a hundred of them were shortlisted to the next round of the competition. In the year 2019-2020, Yau Sze Ho from S2C, won the Silver Prize in the Junior Section in Hong Kong Region of the competition for his work “If I were a Fish”, being one of the top 30 junior secondary students who produced the best writing in Hong Kong.

Sze Ho, in his work, imagined that he became a fish who walked across the land in search for a way to survive, rebelling against its desperate predicament. Faced with its homeland being polluted by humans, the fish had no way to go. The fish thought of heading to the desolate desert as its final destination, eventually leading the fish to die in the sand. Sze Ho speaks to the readers as a fish, who was fooled by its fate despite its brave resistance, giving the readers great inspiration.

“If I were a Fish” shows Sze Ho’s care for the underprivileged groups. Through his writing talent, we hope that Sze Ho keeps spreading his love in the world. 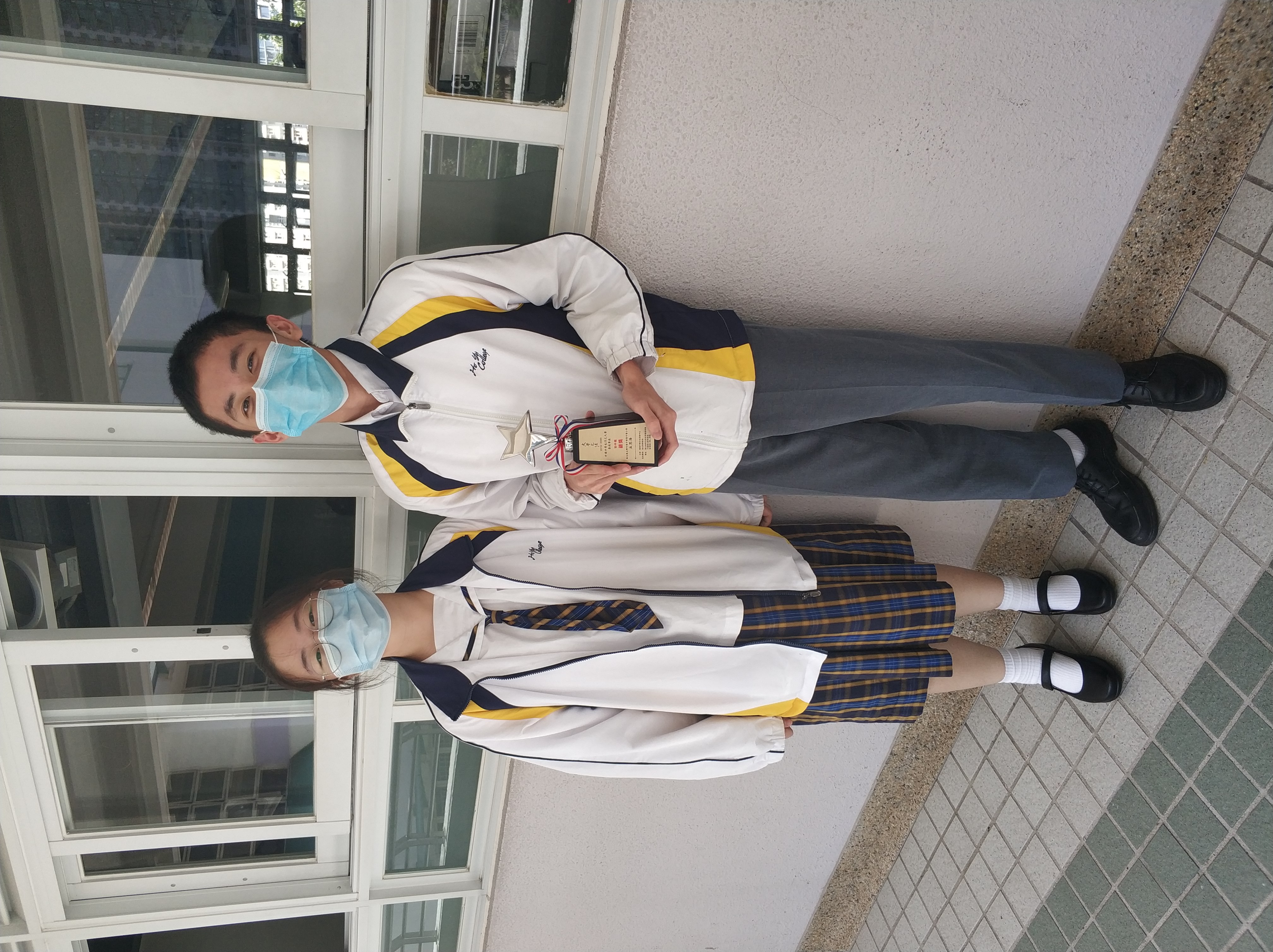 Read more
Page 1 of 6
Goto Top
Our website is protected by DMC Firewall!